The development of community-based oral history

Some of the earliest oral history recording was done by community based oral historians. For example one of the pioneers of recorded oral history in the UK, George Ewart Evans recorded a number of his neighbours in a Suffolk village. In doing so he captured agricultural and community traditions that had lasted thousands of years but would disappear very soon as mechanisation transformed agriculture. This led to the seminal book Ask the Fellows who Cut the Hay (1956). 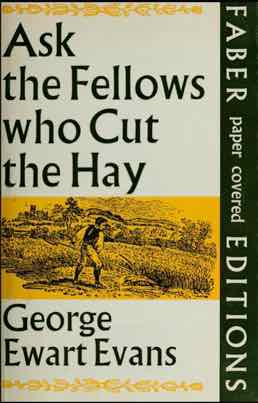 Other community based individual oral historians who have followed in his footsteps include Jerry White http://www.jerrywhite.co.uk/ who recorded people in the east end of London leading to two important books: Rothschild Buildings, Life in an East End Tenement Block (1887-1929) and Campbell Bunk, the Worst Street in London between the Wars. These books were written whilst he was working in east London in local government.

Still on the subject of publishing, in the 1970s a number of community based writing and publishing projects which included oral history were set up. Among them Centerprise https://hackneyhistory.wordpress.com/2011/06/27/centreprise-working-class-history-and-local-publishing-1977/ in Hackney (founded 1970) and QueensSpark http://www.queensparkbooks.org.uk in Brighton (founded 1972). Initially their writings and publications were of a campaigning nature which diversified into various versions of oral testimony. Some activists felt that oral history had an important role to play in bringing about political change.

Also in the 1970s as well as 1980s a number of independent community oral history projects began to be set up. One of the earliest was Ambleside Oral History Group in Cumbria http://www.aohg.org.uk/story.html which started recording in 1976. They are still recording and have over 400 interviews relating to various often rural topics. Another organisation is Colchester Recalled Oral History Group http://www.colchesterrecalled.co.uk/ which has recorded over 1,000 people. In 1982 Waltham Forest Oral History Workshop http://www.wforalhistory.org.uk/ was formed in north east London and now has an archive of over 650 individual interviews.

In the 1980s the then Government, worried about rising unemployment, set up work creation schemes under the title of the Community Enterprise Programme. A number of oral history projects were funded in this way. Among them were projects in Nottingham, Manchester, Bradford and Kirklees. The bureaucratic nature of these schemes managed by the Government’s Manpower Services Commission meant some schemes did not last very long and indeed the recordings and allied paperwork often did not survive closure. Some were assimilated into local government departments although all have now been closed down as separate units. One of the last survivors was the Southampton Oral History Unit, set up in 1983, which lasted until the second decade of this century.

Following on from this funding source albeit with a gap of a few years was the creation of the National Lottery in 1995. Among the original four distributors of money for good causes was the Heritage Lottery Fund (HLF). Criticised by the incoming Labour government for not benefitting the people who play the National Lottery (particularly HLF) a new emphasis on community managed projects was instigated. This led to a favourable attitude by HLF towards oral history projects. There has been an increasing amount of funding going to oral history projects

Many of the grants have gone to non-heritage organisations. Some are national but most are local initiatives concentrating on the histories of people in a town, village or neighbourhood. They all tend to follow a similar pattern of volunteer involvement, training, education and some kind of exhibition including websites or webpages with sound extracts and quotations. There is a high proportion of projects relating to minority groups in local communities based on ethnicity, disability sexual orientation etc. This is very close to the aims of the pioneers of the oral history movement of the 1970s.

In 1993 the Oral History Society set up a Regional Network of experienced oral historians whose role is to support local initiatives within their region. Often the networkers are the first port of call for organisations and individuals new to oral history. Often the proposed projects are about the history of a village, a local trade or institution. The Network has been very successful in helping local groups and organisations to develop such initiatives often with funding from the Heritage Lottery Fund.

The British Library was awarded £9.4 million by HLF in 2015 to develop 10 country and regional hubs to help in the preservation of audio collections of music, folklore, wildlife and oral history. Collections at risk, including some of the British Library’s own, will be prioritised for digitising and conservation. Copies will be held locally, regionally and nationally. The British Library has set up a small team under the title of Save our Sounds. http://www.bl.uk/projects/save-our-sounds They have been auditing sound archives and other sound collections across the UK. The funding will enable 500,000 recordings from both British Library and community at risk collections to be digitised and made available on the web.

Overall to come to a clear definition of community oral history is difficult as there are many examples of a cutover with other forms of oral history. Often a partnership between, say, a university or a museum and a community group is set up to develop a project. Such partnerships often have beneficial outcomes for both sets of partners. A good example of a strong partnership is the work of the East Midlands Oral History Archive (EMOHA) http://www.le.ac.uk/emoha/ based at the University of Leicester. It is true to say that generally community based oral history, whether from a local group or a partnership, grows from strength to strength.