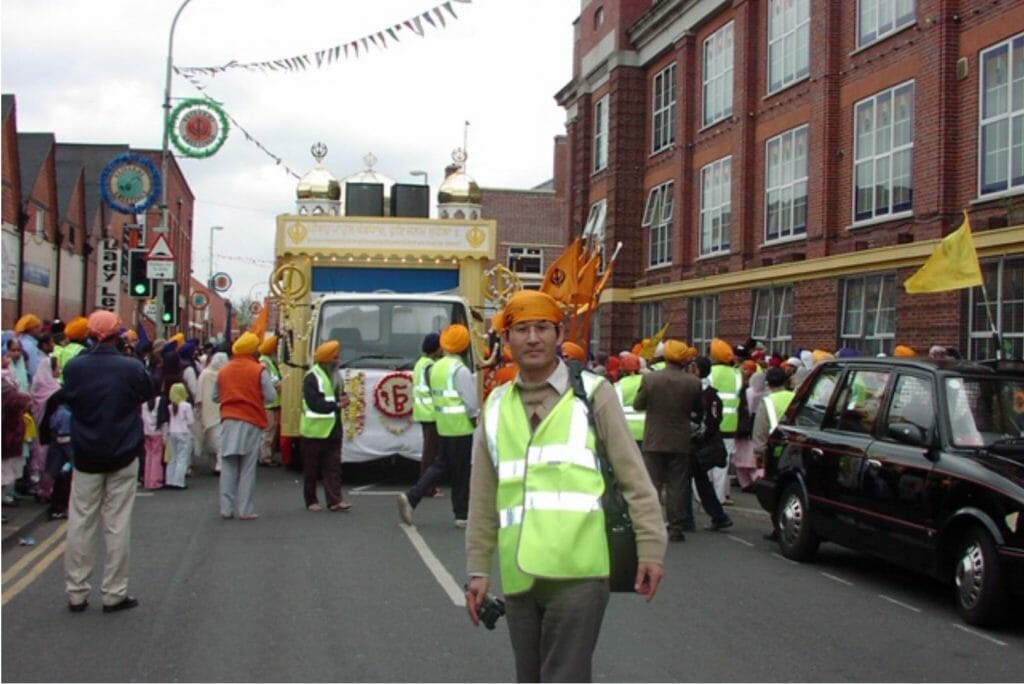 Between April 2001 and March 2002, I was a visiting scholar in Britain, based at the Centre for Urban History and the East Midlands Oral History Archive (EMOHA) at the University of Leicester. While I was there, I was surprised to discover that, according to the 2001 Census, over thirty-five per cent of Leicester’s population was from ethnic minority groups. This was a very different situation from the ostensibly homogenous society of my own home country, Japan. Subsequently, I developed an interest in the history and culture of multi-ethnic Britain after the Second World War, and I decided to focus on Leicester, which has a reputation for being a model of what a tolerant, multicultural city should be. The issue of multiculturalism seemed to me to be a pressing issue for the Japanese, since Japan may itself become a more multicultural society in the future.

Since my sabbatical in 2001, I have continued to visit Leicester regularly, and have conducted much of my research there. I established the Research Centre for the History of Religious and Cultural Diversity at Meiji University in Tokyo in 2010. At the same time, I also began publishing the ‘Memory and Narrative’ series, a collection of booklets which illustrate the individual life stories of a selection of Leicester residents. Each book was based on interviews which I had conducted as part of my research. The twelfth volume was published in March 2020. The purpose of this project was to record the life stories, memories, experiences and traditions of individuals who belong to Britain’s many and various ethnic minority communities, to preserve them, and to ensure access to them for present and future generations.

My interviewees, all of whom featured either individually or as a couple in one of the twelve booklets, included an African-Caribbean woman, a Jewish woman, a Sikh woman, a Sikh artist and his wife, an Indian Muslim businessman from Uganda, a person of mixed heritage (the son of a white woman and a Black US soldier), a Latvan man and his British wife, a Gujarati Hindu man who arrived in Britain via Kenya, an Indian Classical dancer, an African-Caribbean businesswoman, a second-generation Irish couple and an Anglican English couple. The layout of each book is broadly the same. The first half starts with an introduction by me, and then goes on to trace the life story of my interviewee. The second half, presented as appendices, contains photographs, maps, documents, press clippings and a bibliography.

For example, the third booklet (2011) is the life story of Mrs Jasvir Kaur Chohan. She was born in the Punjab region of India in 1954 and came to Britain in 1962. She went through the education system in Leicester, and is well placed to describe the different experiences of three generations of her family. She speaks frankly about her life in the Punjab, her first impressions of Britain, her experiences of school and work, her extended family and her arranged marriage, and about Leicester’s Sikh temples and festivals. She also reflects on her own struggle to reconcile the conflicting demands of British and Punjabi culture.

The sixth booklet (2013) is the life story of Terry Harrison, who was born in 1944, the son of a white Welsh woman and a Black American GI stationed in Britain during the Second World War. He was born in a small village not far from Leicester and brought up there along with his twin sister. He left school at the age of fifteen to work in a factory, and then joined first the Royal Marines and later the Police. Eventually, he settled into a career with Leicester City Council’s arts and leisure department. While he has enjoyed many successes in his life as a person of mixed heritage, he has also been subjected to a great deal of discrimination, which he describes in his narrative. After his retirement, Terry began to search for his biological father. It emerged that he had died around two months before he was born. In his narrative, he reveals the traumatic historical events which he discovered during this quest.

The final booklet (2020) consists of the life stories of Peter and Margaret Adamson. They were both born before the Second World War in Leicester, and spent almost all of their lives in the city. They refer to themselves ‘English’ and ‘working class’. Peter was born in Leicester in 1927. After moving to Lincoln for a while, he returned to Leicester in 1949. After the Second World War, he worked in Palestine, which was at the time a British mandated territory, and then as a draftsman on returning to the UK. I had 11 interviews altogether with his wife, Margaret, who was born in Leicester in 1935, and went to a local primary school and grammar school. She found work in Leicester and continued to live there after she married Peter in 1955. She began work when she was fifteen years old, and she has spent over eighty years of her life in the city. Thus, she is a true ‘Leicester woman’.

I am delighted that I have now completed the twelfth and final publication of this series. As an interviewer who is an ‘outsider’ to British culture, I have collaborated with my interviewees in the work of editing and publishing this series for almost twenty years, flying backwards and forwards between Tokyo and Leicester many times. I cannot express strongly enough my gratitude for the opportunities given to me to discover the depth and breadth of the interviewees’ experiences of living within their various cultural and ethnic communities. It takes more than one single interview to appreciate this depth, and investigating these personal histories in detail has undoubtedly been one of the most valuable experiences of my own life. I would like to express my heartfelt gratitude to all my interviewees, every one of whom gave a frank account of his or her life story, and who supported me throughout the editing and publishing of the booklets.

Kiyotaka Sato is a Professor of Western History in the Graduate School of Arts and Letters at Meiji University in Tokyo, where he established the Research Centre for the History of Religious and Cultural Diversity. His research includes British social history with a particular focus on multi-ethnic and multi-faith aspects of society.