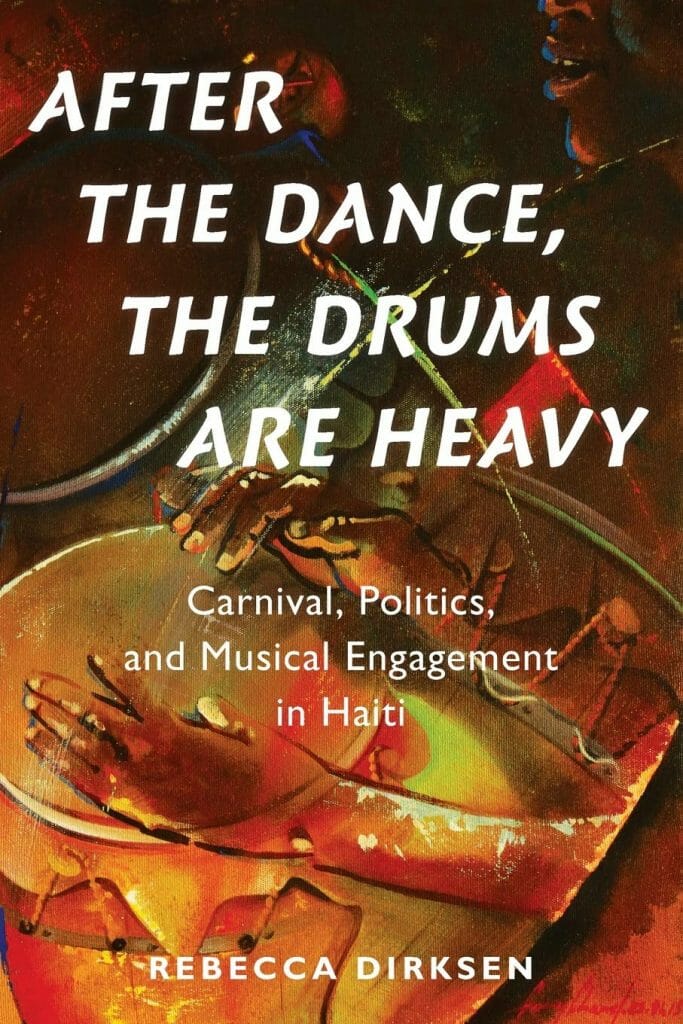 Under the presidency of Michel Martelly (aka Sweet Micky) from May 2011 to February 2016, the intersection of music and politics in Haiti, including the relationship of this intersection with kanaval (carnival), became particularly prominent.As ethnomusicologist Rebecca Dirksen explains in her book After the Dance, the Drums are Heavy, even before ascending into presidency, Sweet Micky, known for his innovations in the popular Haitian dance genre konpa, often included political topics in his music (e.g., his 1994 song “Prezidan”). She states that Martelly ‘crafted a political product inherently entangled with his musical product’ (p 107), demonstrating this by discussing in Chapter Five the festive, carnivalesque music events he organized during his presidency to further support his populist platform. In an analysis that is primarily oriented around the period of Martelly’s presidency, Dirksen discusses the relationship between political manifestasyon (political demonstrations) and kanaval (p 6) in his musical output, as well as the sonic responses from Martelly’s supporters and critics that circulated both during kanaval proper and in other events throughout the year.

After the Dance, the Drums are Heavy: Carnival, Politics, and Musical Engagement in Haiti is a significant intervention in carnival studies which tangibly demonstrates how the festivities relate to sociopolitical issues that occur throughout the year, particularly through the intertextuality of kanaval song. The level of care that Dirksen takes with the linguistic politics – presenting lyrics and interview quotes in Kreyòl and English – is especially striking. She notes in the ‘Language and Listening’ section that Kreyòl is the primary language spoken in Haiti, yet, unlike French, it is not regularly endorsed in official Haitian governmental functions. By unpacking the double meanings of Kreyòl lyrics that target political issues, Dirksen demonstrates the linguistic nuance and wit of the songs that Martelly and other musicians use. Interviews are also integral to the book’s polyvocal approach, especially at the end of Chapter Six, where the author presents excerpts of a group interview featuring interlocutors interjecting with multiple perspectives and thoughts on Martelly.

Dirksen also takes great care to distance herself and resist inserting her own commentary on Haitian affairs, while also not shying away from the significance of those affairs when presenting her research collaborators’ thoughts. This is particularly noticeable in her interview with Martelly in Chapter Five, as she presents his perspectives without judgment. When Dirksen does deliberately integrate her perspectives, she does so parenthetically, clearly indicating that the regular text is to be seen as a narrative driven by the orality of the songs and interviewees. Building on nine years of fieldwork, she indicates that the book is ‘a small slice of temporary reality tinged by my own background, interpretive frames, and interpersonal interactions’ (p 8).

The core of the book spans nine chapters, preluded by useful information that situates non-Haitian readers in terms of Haiti’s history and linguistic makeup, and followed by two epilogues. Over the course of the book, Dirksen demonstrates how Haitian musicians make political points using different techniques (such as betiz, or sexual humor, as she discusses in the case of Sweet Micky in Chapter Four), primarily in song texts, that may or may not fall under the umbrella of mizik angaje (politically-engaged music). Based on the multiple perspectives of the musicians and her analyses of their lyrics, Dirksen makes it clear that there is sometimes a distinction between being intentionally political and unwittingly contributing to Haitian political discourse through music, with both of these techniques or discourses circulating in kanaval. For example, she complicates the perspectives of lead singer of the band RAM, Richard Auguste Morse, who explains that he is not always intentionally giving his input (or decides to hold back) on Haitian politics, despite his direct participation in and commentary on governmental affairs in other instances. The same issue comes back up in Chapter Nine in terms of which artists embrace the term mizik angaje, or prefer an alternative term, mizik sosyal (socially engaged music).

While she primarily discusses specific musicians and songs of the Martelly era, Dirksen complements those case studies by discussing the historical background of Haitian genres and concepts. She explains that her ‘argument spirals outwards, gathering ever more detail and contextual critique through an expanding double-helix form’ (p 11), referencing Haitian Spiralism, a literary style, in the book’s structure. For example, in Chapter Nine, she situates the musical output of the band Boukman Eksperyans within larger phenomena such as the Vodou concept of lakou (familial unit) that they reference in their songs. The contextual information is quite useful, but the structure of the book is not for the faint of heart, as the reader must comb through the book carefully to ascertain the depth of these musicians’ songs and Dirksen’s own intertextuality across After the Dance, the Drums are Heavy. Dirksen explains that ‘there is no distinctly linear, chronological argument here, and no adequate conclusion, as carnival is something that by necessity goes on’ (p 11). From my perspective, the result is a beautifully crafted book that takes on further and further meaning upon each read, as I find more points of interconnection each time.

Rebecca Dirksen’s book is an excellent model for carefully and respectfully discussing a scene’s politics from an outsider’s perspective. Though the book concludes before the onset of the COVID-19 pandemic in 2020, it is also relevant in the context of crises that have since surfaced, as she discusses Haiti’s transnational musical influence, reckoning with natural disasters and economic decline, and confronting government corruption, to name a few. As Dirksen states: ‘From here, the argumentation allows us to move toward reasons for redefining mizik angaje in ways that resonate today, which are not exactly the same ways that made sense twenty or thirty years ago, but which certainly bear that historical baggage’ (p 6). And so the book continues to spiral outwards, even after its publication.

Listen to Isabel Machado’s interview with Rebecca Dirksen on the New Books Network. 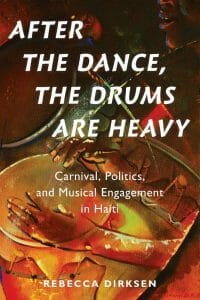 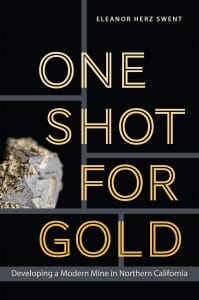 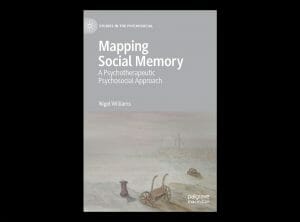